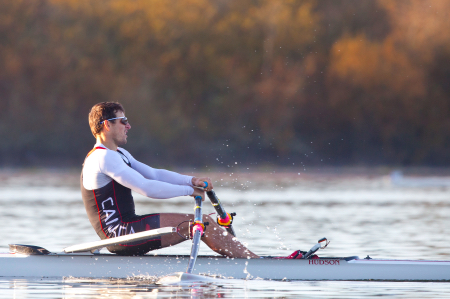 Last week was a tough and intense week. Less than 2 weeks ago, we were told that a week of testing, on and off the water, was going to be held in order to select a group of 6 scullers for our last winter camp in Sacramento. At the end of this camp, we will have a month left before our first race in Europe and we are going to get closer to our final line up in the quad that will race the qualification regatta in May. Obviously, this week of testing looked like a week of trials for the quad. On the menu, we had a 6k erg test on Monday, a 2k in single scull on Wednesday and a matrix in double scull on Thursday. No way to hide. It was a week at a 100%.

The week leading to these trials was not an easy one either. The University of Washington crew came to train with us. Pieces side by side with the Huskies. Coxless four against quad. Quad against Eights. It was rejuvenating but I didn’t come out unscathed. In December, I managed to pull a Personal Best on my 6k erg test (18min24 – 1’32’’0/500m) so I decided to tackle this one by going for a new PB. Halfway through I looked at my time and I could see a 9min10 (1’31’’7 average) but around the corner, Thor and his legendary hammer were waiting for me. I got struck pretty badly and I can assure you that the last 3k was really hard and painful. I finished in 18’33 (1’32’’8 average) with nothing left in the tank. It was clearly not a day for a PB.

The next day was a light day to buffer the test and I had to fight against a headache and legs like jelly. Moment of truth the following day with a 2k time trial in single scull. To make it fair and unquestionable, we picked up our starting number out of a hat (our coach’s hat). I picked up the number 5 out of the 10 pieces of paper. 10 rowers on the start line. I had a decent race and manage to win however I had terrible sensation throughout the 2000m. Nothing compare to the racing season when we taper and have this 2nd gear whenever we need to. At the 1000m mark, I had nothing left in the tank except my determination and a touch of madness allowing you to go on when it hurts that much. I win in 7min14 a bit more than a second ahead of Will Dean. Pascal Lussier, my Quebec fellow, takes third place a bit less than 4 seconds behind.

Not much time to recover (or puke for some of us) and we had to think about getting ready for our Matrix races the next day. Only the first 6 in single scull were going to enter the double races. Rob Gibson is coming back from a minor injury and as he won the past 2 national championships in single scull, he was not going to be part of this “testing week”. So the top 5 guys in the double matrix were going to join Rob to Sacramento. Based on the results in single scull, Terry decided to pair me up with Will Dean for the 3 races to have a “reference”. The four other guys were going to switch partners. 3x1500 meters time-trial in relatively rough conditions with 30min rest in between. Just enough time to switch partners on the dock, adjust your foot stretcher and breathe!

One word comes to my mind: tough. The feeling of having no ammunition anymore and fighting with the stock. Bleeding noses, guys puking or barely standing on their legs, we were more in a scene of Apocalypse Now than in a Disney Movie. The good news is that the group is very dense and the difference between all of us is tight. Overall, Will and I won our 3 races followed by Pascal Lussier and Matt Buie (2 hundredth of seconds difference on the cumulate time between the two of them!). It is Taylor Perry, U23 World Champion last year in the Men’s Quad, who got his ticket for California for a couple of seconds over Andrew Stewart Jones. Those few days were a real physical and mental challenge that brought us together. To fight for your seat and to measure yourself on the water are, in my opinion, the ingredients to trust your teammates and perform as a crew.

Now, we have to recover as much as possible before going south to the Californian sun. 2 weeks of double and quadruple scull. The U23 team will join us to spice up the camp. Sounds like we are going to have some epic battles on the water. Only one month before we leave for Europe. One month to finalize our preparation. It is coming quick but we can already feel the will to fight.