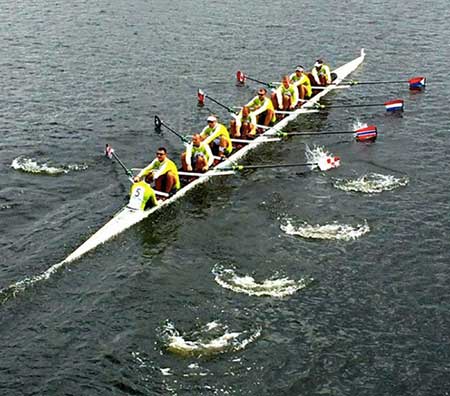 The 50th Head Of The Charles gives me a lot to talk about. As I said in my last post, those days with the Great Sculling Eight crew have been some great moments.

On Saturday we all raced in doubles or singles (except Roel Braas). That was definitely not our priority number one for that WE. On friday afternoon, for most of us, we went on the water for a few hundred meters to see if the foot stretcher and the pitch were fine. Nothing more than this. I decided a few weeks ago that I would try the new Arrows from Crocker. The feeling with those oars is a bit different compare to my « old » S4 especially at the catch. But I really like rowing those oars. Very light, perfectly balanced. The drive feels very constant and solid.
Never mind the seek for perfect settings.... here I was at the start line with my « quickly-rigged » Hudson wondering why I was seating here. The past week has been a bit upside down because of a back injury that prevented me from training from sunday until thursday. I managed to fly to Boston, stretching and releasing the tension on the floor at the back of the aircraft. I have to say that I wanted to make sure that my back was going to make it to the line. No way I was going to let my crewmates down the next morning in the 8. So I raced with one thing in mind : « take it easy ». The Head Of The Charles is mainly about taking the right course which means...steering a lot. In the 8, no worry. You have a coxswain. But in single scull, twisting your neck every 10 strokes is what you have to be ready for...especially if you don't know the river so well. So I focused on steering before hammering ! I took it as a game trying to take some good lines, buoys between my blade and my hull. I went for a solid last 500m rating 36-38 and that was it.

If you would have asked me my position right after the finish line, I would have probably told you that a top 10 would have been a pretty good result. I came 3rd ! 4 seconds behind last year's winner, K.Borch from Norway, who came 2nd and a tinny little second ahead of Mahé Drysdale from New-Zealand (current Olympic Champion and 5-times word champion in single scull). But the winner of the day is Andew Campbell (the 2014 US lightweight single sculler) in front of his home crowd and on « his » river. With 10 seconds ahead of the field, he was, with no doubt, the 50th winner of the Men Single Event. So I was really happy with my result which means that my basic speed is quite good...as well as my steering skills !
The next day was the big deal. Our last training together showed that our cruising speed was high. Nevertheless, in a race, the question is : « Are you able to do it on that particular day, in those conditions for 3 miles ? ». In the strong and cold headwind, we knew that power without a clean and savvy stroke was going to be unsustainable on that distance. My job at bow? Make sure to keep the balance and release as clean and stable as possible. Our middle four, with an average 2k erg of 5'42, was clearly going to be the engine room for the Sinkovic Brothers stroking as long as possible. No crazy rating. A steady 34-35 to make sure that everyone could row and use his full length. We made sure that we left enough gap between the Great Sweep Eight, who started right ahead, and us. We didn't want to be in their wash nor help them by giving them a boat to race against. The bigger the gap, the harder it is to judge the distance you lose or you win. Our coxswain, Peter Wiersum, did the best line you could imagine. The final charge was so impressive. We were in unison and with a solid 40 strokes per minute, we were literally flying (at least...at bow !).

We crossed the line with the feeling that we had done everything we could. Mahé used those words while recovering on the water : « We don't know the result yet, but whatever it may be, we have done the best race we could do today. Heads up. Proud of you Scullers. »
It took almost an hour before the official results to be announced. A « massive » 3 seconds Victory for our Great Sculling Eight ahead of a Great Sweep Eight and a disappointed Hamish Bond who worked hard to gather the best sweep rowers and make them train on the Charles for a full week. They wanted to win. We wanted to win. The Scullers bate the Sweepers at their own game...
A 1st place in the Eight. A promising and surprising 3rd place in single scull, I go back to Victoria highly motivated.