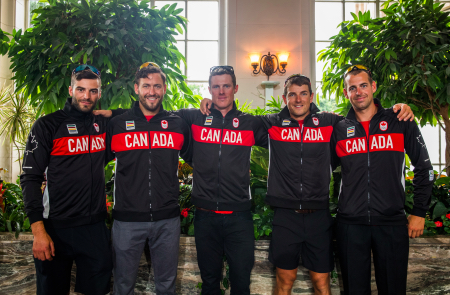 Toronto. June 28, 2016
It is official. The Canadian Olympic Rowing Team was announced. And I will be part of the trip. We left our everyday routine on the west coast to fly over on the other side of the country. A 36-hour break in a very intense preparation. However, I do think that it is important to appreciate and value those rare moments. “Hay is in the barn” as we say here. Work is done and now it is a matter of how we approach things. Probably a few lessons I have learnt from my past Olympic experiences.

It is truly a pleasure to meet up with our whole team and pause for a photo that we might show to her grand children in 40 years from now. Special moment to put on your Canadian Olympic suit or to talk about our program once in Rio. It becomes real! But it won’t be my first rodeo and I do know better now what are my strengths and my weaknesses approaching such an event. We are used to hearing that the Olympic Games are a different beast, that it has to be approached slightly differently. And at the same time, it is just another regatta. A 2000-meter race. Nothing more. There is for sure a middle ground between these two points of view. We have the right ingredients, youth and experience, in our boat to find that middle ground.
From the moment we didn’t qualified at World Championships in 2015, we have hopped on a mission far more ambitious than just qualifying for the Olympics. 338 days to treat each of those days as if it was a necessity to perform as a unit. As a quad.
So when walking on the stand with my four crewmates and our coach, there was more behind it than being officially announced as the Canadian Men’s quadruple scull for the 2016 Rio Olympic Games.
We are in the last 40 days according to whole the official countdowns and soon we will have to pack our gear and head east. First stop will be Dartmouth (New Hampshire, USA) where we will train for 13 days before moving to Guelph near Toronto to polish our preparation. Great advantage for us: only 1-hour jetlag between Toronto and Rio de Janiero so we will fly at the very last minute to avoid as much as possible the craziness of the Olympic Games.
But before that, I will enjoy my last moments with my family. Always difficult to leave and even more now as I will find a different little girl when I come back at the end of August. Facetime is going to be my allied for sure!
“The adventure goes on....” 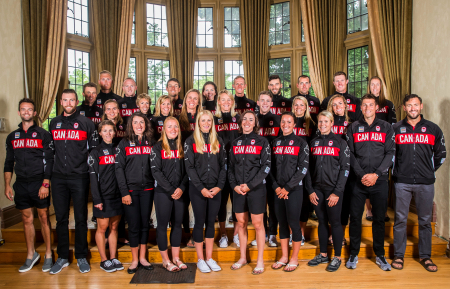